In response to my mate Tom Wells' commentary, herewith the response to his email that the Smith Center in Chapel Hill went quiet with Austin River's shocking buzzer bomb to beat the Heels.

Quiet as a church.

My nephew, who got rejected from Duke despite getting 1580 on his boards and with me, my son, my sister, my aunt, and her father all having gone there (not enough money given....indeed precious little after the rapacious fees charged), instead went to Carolina, where he is now manager of the baseball team and a RABID, but RABID anti-Dook fan. Did I say RABID? He has turned my sister as well, which believe me, is UNFORGIVABLE.

The amazing thing is that just watching that took me back 35 years as if it were yesterday. Ah the memories, such as when I got fired from my job as a waiter at Harrison's in Chapel Hill for going to the Final Four in St. Louis when Duke made it (Gene Banks, Jim Spanarkel, Mike Gminski) though I warned them in advance. They didn't bother to tell me, just took me off the rota, and when I turned up for work and said what's the story was told with a shrug of the shoulders, Oh... Will (the small-dicked manager) fired you.  I went and ordered six beers (Heinekens, as it happens, when that meant something), a tuna melt, a cheesecake, worked my way through the whole lot with Will warily watching me from the end of the bar. I then said to the bartender, "I guess that was on the house", walked past Will and said: "Will, what you did was a really bush move, but it doesn't surprise me because you are a real bush league person." No comeback from the weasel.

And I paid not a farthing.
And that, as they say, is that. I think the fact that a few weeks earlier I, as the only Dookie, went to work with Go to Hell Carolina painted on my cheek might have had something to do with it.

So I have prior, and when every so often God waves his arm and allows the ball to bounce right just this time and tickle the cords as the buzzer sounds, you will forgive me if I get PRETTY F******* WORKED UP by the whole thing.


Sports are life with the volume turned up.

But it is still a friendly rivalry, not like Liverpool-Man U, as evidenced by the birthday limerick written by the erstwhile girlfriend of my roommate in grad school, both Tar Heels.

I can tell you that it is no fluke
One thing about Joel makes me puke
It's bad that he studies
But worse, that he's buddies
With Eric, that Wadhead, from Duke.

Next time, however, it will be Carolina's turn.

And so it goes. 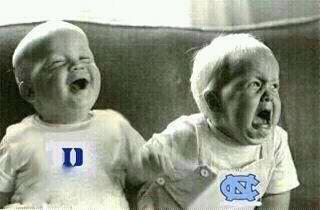 Posted by D Eric Pettigrew at 12:26 No comments: Links to this post