I AM LICHEN ART

Sometimes nature is its own paintbrush. All you have to do is imagine.

Thes were all taken at the top of a mountain on the island of Brac, a place called Vidova Gora which means View from the Hill (I believe).
Posted by D Eric Pettigrew at 12:38 No comments: Links to this post 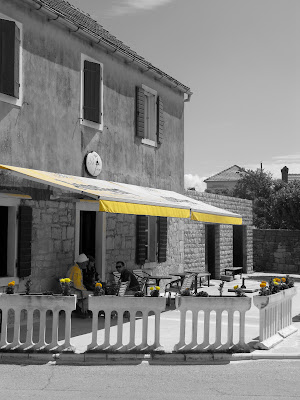 It all started with the colour yellow. We were in Croatia on the island of Brac, escaping from the instrument of torture otherwise known as the British summer. When after a first day of brilliant sunshine we had to endure an atypical Croatian imitation of an on-again off-again cloudy faux Brit summer's day (they seem to follow us around no matter where we go), we decided to rent a car and explore the island. If there were clouds to endure, at least we would endure them on the road, not huddled hopefully on a pebble beach. As it happened, after we had already committed to this course of action, the sun came out. We repaired to the port in Supetar, where we were staying, to rent the car, a banged up Fiat Punto cabriolet. Ever vigilant, my wife noted that there were scratches visible which in more normal circumstances we should point out before departing, lest we be penalised later for them. I was more concerned about the radio having been ripped out, but to err on the side of caution I mentioned these scratches to the attendant. "Just don't make any more big ones and there won't be a problem." I think he was more worried about whether the clunker would run. He also reduced the price originally agreed. 290 koruna. About £38. What the hell.

Our first objective was Vidova Gora, the highest point on all the Adriatic islands. Christina, my wife, who speaks Polish, pointed out that this meant View From The Hill. Slavonic languages are all brethren. We duly climbed up the mountain/hill in brilliant sunshine. After looking at the vista, which was spectacular, we headed down towards Bol on the south side of the island. We passed the turnoff for a town called Praznica. There are not a lot of towns on Brac, so I figured it was worth a shot. In any case, when you are riding in a convertible and you have time, sun, and an eye-piercing blue sky on your side, everything seems possible and perhaps interesting. 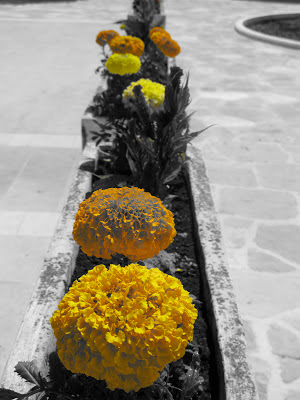 In Praznica we were the only car in a deserted square, with a church and a small restaurant where three men sat having coffee, one of them in a yellow boiler suit with a white do-rag/turban and a splendid beard. Always on the lookout for a theme, I hopped out of the car, and setting the camera to pick out only the colour yellow, I wandered over and began snapping, hoping to draw little attention to myself. As if this were possible in a deserted town.  I snapped off a few photos of the flower boxes, and then thought I could pretend to take a pic of the flowers and include the man in the yellow suit. 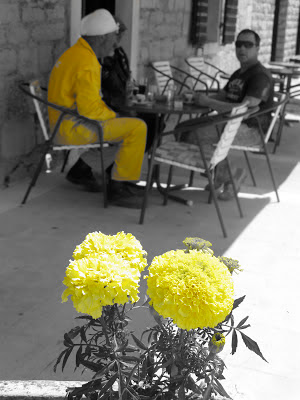 This is what is known in the trade as a stupid move.

The reaction was immediate.

As I turned to peel away, there was a chorus in unison, led by Mr. Yellow.

I pivoted, slightly embarassed. (Only slightly, I might add. I am always doing wadhead moves like this)

"Are you from Interpol?" interrogated the bearded boiler suit man in a heavily accented and smoky voice.

"My picture won't appear on the web...?" he added, with the pause acting as a question mark.

"Uh....No," I responded. This was going to require some explanation, especially since I had asked no one's permission to take their picture

"I was just building a theme.....you know yellow." I walked over and showed him the flower/suit photo above.

"Very good," he boomed. "G9. I have that camera," he added parenthetically. He offered me a taste of the pastries they were eating, which I gratefully accepted. "Where you from?"

"Too bad. I am giving a party here in this town for everybody.We will serve 2000 different types of food, the food we won't be able to eat come July when we join the EU. You like the EU?"

"Uh, well, it doesn't seem to be good for all, " I offered up diplomatically.

"It is a disaster for Croatia." He leapt up. "I am a sculptor. Come. Come with me and I will show you my workshop."

Mr. Yellow did not speak. He resonated. And a No response did not seem a possibility.

I crossed back over the square as Mr. Yellow leapt onto his Vespa. I climbed in the Punto. My wife, who had been observing the proceedings from afar, was shaking her head. An explanation was due and payable.

I offered up. "He's a sculptor and will take us to his workshop."

She held her head in her hands. "I know what to tell Herb (my mate)....Oh look, Eric has found a new friend."

She shrugged her shoulders. After 33 years together, resistance is futile.

Mr. Yellow zoomed off, winding his way to the edge of the village. He didn't look back, being what I would call a Lead-follow-or-get-out-of-the way kind of a guy, it seemed. He cut off down a drive guarded by two rough slabs of marble acting as gateposts. There was little or no clearance, and mindful of the scratch situation, I gingerly inched the jalopy past with no ill effect.

The yard was filled with various works in progress, and a patina of marble dust covered everything. In his shed a worker was cutting some marble. Mr. Yellow began to explain some of his pieces. All of them in one way or another were about the EU. They were subtle digs at the disruption that will no doubt ensue from dancing to the Brussels drummer, something which has cascaded across all the countries (especially the Southern tier) of the EU. Has no one been reading the papers amongst the politicians in Croatia? The honeypot which was once the EU is no longer.

A picture of a tuna was a reminder that they cannot be eaten due to regulations regarding mercury, with the ubiquitous computer mouse and mobile phone representing the intrusion of modern life on old ways of doing things which have served Croatians quite nicely.

A sculpture entitled Bocca di Verita, with the E replaced by the Euro,was equally subtle. The European flag had its stars replaced by circles, with a square at the bottom. Mister Yellow pointed to the square.

"Croatia is a square peg. Square peg cannot go in round hole. We will never fit." He spit the words out.
The mouth of Truth was a gaping maw, with a briefcase full of the Euros that will supposedly come Croatia's way.  He put his hands down the throat.

"They think we will find money there. Pah! We will only find a big dick, and they will fuck us."

It was hard to keep up which his high speed invective, but it was very clear that he was

a) passionate
b) committed
c) implacable, and
d) talented.

Eminently quotable, though the high volume has made accuracy from memory nigh impossible.

On one statue, he had carved the word Gospadar. I asked him what it meant. He said Master. I asked him how to say Mister Yellow in Croatian. He said: "Gospodim Zuta." He was both,

And that was it. The tour was over. It had only lasted 5 minutes or so. An intense five minutes. He gave me his name and address.

His name is Ivica Jaksic, and he is from Bol. He is already on the internet (see the pic below), and the statue I saw later that day in Bol, which I have called Mermen below, was done by him (I believe, but I am deducing that from his picture).
Here's hoping that joining the EU will not bring forth the disaster he predicts, and instead perhaps will allow him to bring Mister Yellow to a wider audience. Here is also hoping we meet again, where I can offer him something other than a study in yellow. A toast perhaps. 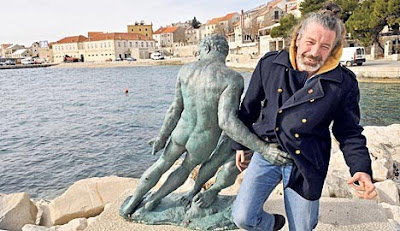 If you read this Ivica, Mister Yellow now has a friend in the UK, which may or may not be still a member of the EU as time goes on. But while it is, welcome to the EU, and when you come to London we can sample some of the other 2000 foods which we can still eat without having Brussel bureaucrats tell us what to do.

Posted by D Eric Pettigrew at 23:17 No comments: Links to this post