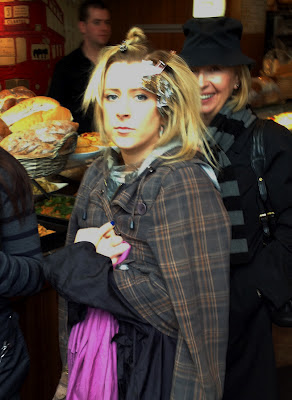 The law of unintended consequences struck, as the bomb threat of a lorry driver gone nuts on Tottenham Court Road forced the evacuation of several city blocks, sweeping up this unfortunate girl in the midst of having her highlights done, a portrait of quiet despair and frustration. One can only imagine her reaction several hours later when the crisis abated.

Posted by D Eric Pettigrew at 14:54 No comments: Links to this post 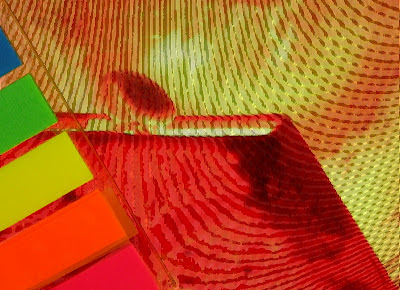 We are all, says Bill Bryson, an arrangement of atoms. What we pass on to the next generation is what we tell them or what they remember. These atoms arrange themselves as memory, in mementos, photographs, or stories which fade and twist with time.

My father died 24 years ago. He was a private man, and shared only that part of his life that he wished to share with us, his children. Whilst cleaning out old papers, I came once again upon a chapter of his life, which, save some very brief stories he told me once, was never open to us. The war.

Due to the efforts of my sister, we discovered that my Dad, who fought in the European theatre, maybe had more to offer than we thought. He got a Bronze Star, and fought along the same campaign as the 82nd Airborne of Band of Brothers, save for the fact he was in the Quartermaster Corps of the 80th Infantry Division. His number was 01595758 and though he ended the war as a Captain, was a 1st Lieutenant when he was awarded the Bronze Star. The Star was awarded via General Orders(Number 231) on 17th September 1945 By Command of Major General McBride. The inscription only says: For the period 7 August 1944 to 5 May 1945 in FRANCE, LUXEMBOURG, GERMANY AND AUSTRIA. It doesn't say for what, other than it was for "meritorious service in connection with military operations against an enemy of the United States." 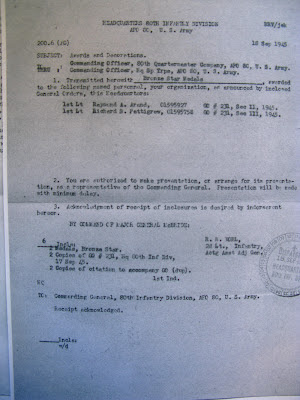 Only 3500 (depends on who is counting...hard to get a definitive number) were given out of the 16.1 million active service personnel during the War. That, you would think, would merit a mention from my father. But no. He never said a word about it, though he didn't like Germans, as a general rule.

In his papers, I also found the only words he ever wrote about the war. 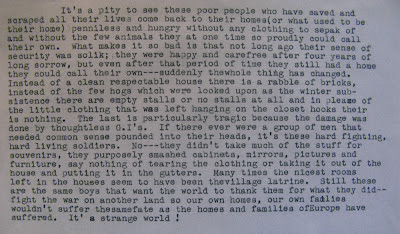 It's a pity to see these poor people who have saved and scraped all their lives come back to their homes (or what used to be their home) penniless and hungry without any clothing to sepak (sic) of and without the few animals they at one time so proudly could call their own.  What makes it so bad is that not long ago their sense of security was solik(sic) ; they were happy and carefree after four years of long sorrow, but even after that period of time they still had a home they could call their own--suddenly the whole thing has changed. Instead of a clean respectable house there is a rabble of bricks, instead of the few hogs which were looked upon as the winter subsistence there are empty stalls or no stalls at all and in place of the little clothing that was left on the closet hooks their(sic) is nothing.The last is particularly tragic because the damage was done by thoughtless G.I.'s. If there ever were a group of men that needed common sense pounded into their heads, it's these hard fighting, hard living soldiers. No----they didn't take much of the stuff for souvenirs, they purposefully smashed cabinets, mirrors, pictures and furniture, say nothing of tearing the clothing or taking it out of the house and putting it in the gutters. Many times the nicest rooms left in left in the houses seem to be the village latrine. Still these are the same boys that want the world to thank them for what they did--fight the war on another land so our own homes, our own families wouldn't suffer the same fate as the homes and families of Europe have suffered. It's a strange world!

Maybe he received the Bronze Star for his conscience.

After all these years, his memory has never lived stronger, and I have never been more proud of him than I am reading these words he wrote. He was a giant of a man, and he is and will always be my hero, my father. 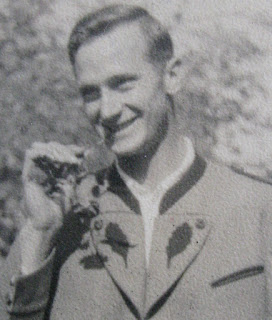 Posted by D Eric Pettigrew at 10:22 2 comments: Links to this post