WHEN YOU MEET ONE OF YOUR HEROES

My friend Andrea invited me to Wimbledon, but with a special twist. We would have a chance to hit with Stan Smith, who was in the final against John Newcombe when I was in England in 1971 playing tennis tournaments (he lost that year, but won the next against Nastase and was number 1 in the world) and who was always my favourite player. Why? Because he was calm, because he was classy, because he was a gentleman.

He also featured in one of my less proud moments. When I went to see him in Charlotte NC (I can't remember if it was the Davis Cup, which I did go to, but I think not....it may have been just a regular tournament). In any case, he was being interviewed after a match walking back to the locker room. In those days there was no security, and players were....accessible...and nice (with the exception of Cliff Ritchey, who was a sourpuss).

Anyway, I was walking next to Stan, and noticed that his wristband was hanging out of his pocket. Being what my doubles partner and best mate Randy said I was, a twirpster, I made a move to filch it. Faster than you can say fast, Stan's right hand shot out and grabbed my wrist. He looked at me and said (rather forcefully): Do you want it? Uh......Yes, I said embarrassed. Then ask for it....nicely.

So, as far as Stan Smith was concerned, I had prior.

What happens when you meet a legend?

Well, if you are like me, your brain scrambles. I arrived early, went to the court, and began knocking up with a nice Serbian girl (who had trained at Nick Bolletieri's). I felt relaxed, loose. Then Stan arrived, dressed in his Davis Cup captain's tracksuit, and thwang.....I tightened up like a guitar string.

We had a clinic, and he gave many good pointers, both in general (stretch, keep your head still and pivot around it, worry only about the point of contact...always out in front) and specifically to me (hold the ball for the service toss in only two fingers, the middle and the ring finger, make your backhand follow through long (I tend to come across it). Then he said we would break into groups and play a round robin against him and his fellow pro and partner Gary and another top teaching pro (Bob?), rotating after every four games. Then there was a prize for the winner.

I started off with Andrea against Stan and a competent player.

I was still tight, completely disregarding what Stan had just finished telling me. This is what happens when you get on a tennis court with someone who used to be no.1 in the world.

So no chance at winning, I thought to myself. Forget it. Just give it a go. Eye on the ball. Head still.  Just smack it.

Our lives are filled with countless moments, the vast majority of which pass into oblivion unnoticed, unremembered. Even those which are important are important only to us, and for different reasons.

I remember two from the rest of that morning. One is hitting a topspin backhand to break Stan as he came to the net (by the way, he was serving a 1/2 speed, it should be added). The second is being down 0-40, having Stan say: I'll give you $100 bucks if you can ace me, and coming back to tie the match, and then winning the last one playing with Stan for two games and with Bob? for the last two. I didn't ace him, but I did ace Andrea.

Then there was the prize ceremony, and I said to Stan's assistant Stuart: Hold on, let me get my camera so I can take a picture of the winner, and having him say: Well, you'd be taking a picture of yourself.

So there you have it.

I told Stan and the assembled folk the pickpocket confession, and while I stood there, Stan wrote on the prize, a racquet, and showed me what he had written on the cover:

TO ERIC, GREAT PLAYING FOR A PICKPOCKET.  STAN SMITH

Franz Kafka once said that life is a series of small scale victories and large scale defeats.

In the great scheme of things, this was a small scale victory, by anyone's measurement.  Except for me.

Life is a great inexplicable circle, and sometimes, just sometimes if you are very lucky, you get to meet one of your heroes. 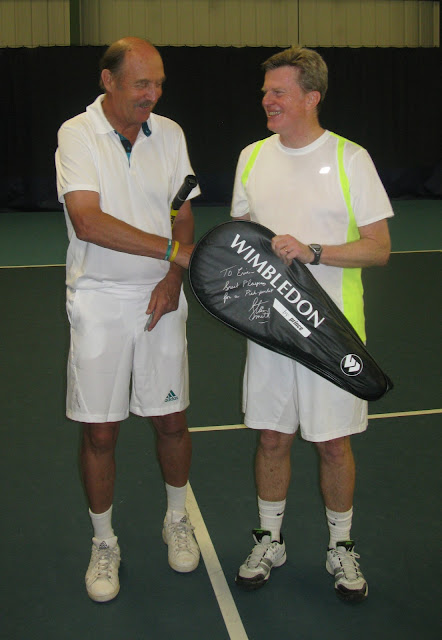