THE MUSIC IN MY HEART Chapter 2 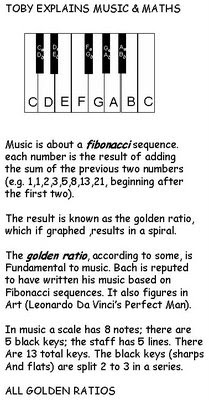 Before the trip , we head first to learn how to make sushi, our joint Christmas gift from my wife Christina (Steens). The Japanese couple, who give the course from their home, live in Golders Green.
While waiting for the course to start, we kill time in a kosher coffee house, as the area is overwhelmingly Jewish.
We are the only goyim in the shop, a fact made obvious by:
a) our looks and
b) the dumb questions I ask about why some of the croissants are in a section marked parve and others in one called milki.
This, I am explained by the girl at the counter, is due to the fact that meat and dairy cannot be eaten at the same meal. Parve means neutral in Hebrew, neither meat nor dairy. Obviously, the milki ones contain milk (or butter).
Our Jewish lesson is cut short by a phone call from Steens, who informs us (via a relayed call from Mr. Matsunaga, our teacher-to-be) that we have illegally parked. We rush off, and arrive at our sensei's house.
Mr. Matsunaga is a tall (by Japanese standards, not Toby standards)
combination sushi chef/acupuncturist.
Not too many of them, I imagine.

His wife sits us down after we have removed our shoes and donned our white sushi jackets and we chat over green tea. We then adjourn upstairs through the dark panelled wood interior (think Tudor castle in a semi-detached row house) to their kitchen.
Our lesson is divided into five parts, a fibonacci number.
1) PREPARING THE RICE FOR COOKING Washing (6 times) until the water is clear, achieved by massaging it.
2) COOKING 15 minutes in a Japanese rice cooker, followed by 15 minutes "rest".
3) CHOPPING RAW MATERIALS These include fish: in our case sake (salmon), ebi (shrimp..already prepared), and suzuki (sea bass). There are also many vegetables to prepare: cucumber, avocado, takuan (the yellow pickled radish or daikon). There is also tobiko (orange flying fish roe).
4)PREPARING THE RICE (AGAIN) This consists of mixing the rice and vinegar (sushi, in case you didn't know, means vinegared rice) in a large wooden bowl like a cut-off barrel with a wooden spatula in a chopping motion and mixing the wasabi paste from powder and water.
5) ASSEMBLING THE SUSHI This last part is the crux of the whole enterprise. Using the same raw materials, (and I mean raw in the literal sense), there are innumerable types of sushi, all of which involved assembling the component parts in some unique fashion. Just as the Italians boast of their infinite types of pasta, there are tons of different ways of making sushi. We learned just a few.
We concentrated on:
1) maki, or sushi rice rolled in nori (seaweed); and
2) nigiri-sushi, which are the lumps of rice with a bit of wasabi inside and a sliver of fish on top; We did not attempt the other two; and
3) inari-sushi, or sushi rice stuffed into a tofu pocket; and
4) chirashi-zushi, which is fish on top of rice in a bowl.
Did you ever see the movie Desperately Seeking Susan?
There was a great exchange between Madonna (yeah, I know...) and a taxi driver about sushi. Says the cabbie:
"Sushi? Yeah I tried some sushi once. Took it home and cooked it. Tasted just like fish."
Lest you think that what we attempted in 3 hours is a dawdle, it takes 5 years of apprenticeship in order for a sushi chef to become a ita-mae, (literally before people) or a chef who can step in front of the customers.
MAKI SUSHI
There are basically three sizes of maki sushi:
hosumaki, which are the small rolls,
chumaki, which are medium, and
futomaki, which are large.
Kappamaki has the nori, or seaweed, on the outside.
Uramaki has the rice on the outside (which is why it needs to be sticky, and is dipped in sesame or other seeds or spices or roe.
There are also regional variations, from Tokyo: temari maki, which is rolled up into a ball in cling film, or oshi sushi from Kyoto/Osaka, a variation which is jammed into a box and comes out perfectly square. 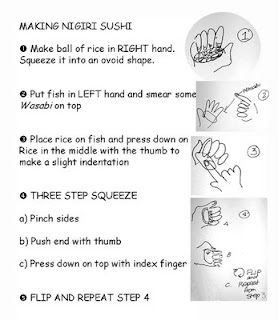 THE CHOREOGRAPHY OF NIGIRI SUSHI
Like most things Japanese, there is a correct way of doing things, honed over the centuries. Think you can just take a blob of rice and make nigiri-sushi ? Nuh uh.
You have to do it right, and in the right order. Those with fumbling fingers and little patience need not apply.
We emerged after three hours, a little wiser, perhaps, but rank amateurs. We did however, have a huge plate of sushi which we duly took home and presented to Steens. Guess what? Tasted just like fish, even without cooking it.
Go to Chapter 3
Posted by D Eric Pettigrew at 07:26 No comments: Links to this post

Email ThisBlogThis!Share to TwitterShare to FacebookShare to Pinterest
Labels: The Music In My Heart
Newer Posts Older Posts Home
Subscribe to: Posts (Atom)