Would you even consider a leader who wasn't even elected by the members of his party? Who gets in power by an alliance with unions but in the next breath disavows them?

Do you really ever want a government in place where behind the scenes a union boss can call on a strike without EVEN A MAJORITY OF HIS OWN MEMBERS?

Well, that's what you have got with the latest Labour party farce.

After an election process which, let's face it, was completely off the radar screen, Fast Eddie won the battle of the brothers, sneaking up at the last moment with the unions in his pocket (or he in theirs). Neither the majority of party members, MPs, or MEPs voted for him.  And some of the union members are not even in the Labour party.

What a system, eh? 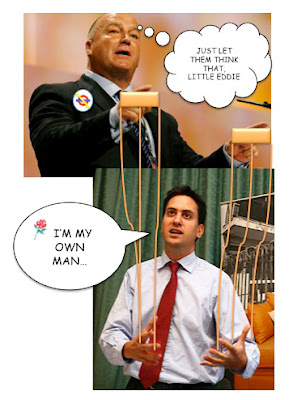