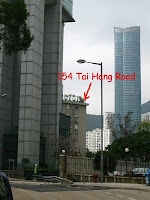 We decide the first thing we will do after breakfast is to go to our old flat on Tai Hang Road (Dai Hang Doh Yat bahk ng sahp sei ho- 154 in Cantonese). The taxi driver instructions I learned that first week so long ago still apply. Jihk heui-(straight ahead), jyun joh (turn left); jyun yau (turn right) and ni doh! (here!...stop is understood). We pass familiar sights and street names with their Cantonese equivalent (Stubbs Road=> Stubs see doh etc.). We head for Wong Nei Chung Gap Road which cuts through the mountains to the other side of the island and which abuts onto Tai Hang Road. Far above us are lots of new buildings. I notice two types: either needlelike very tall ones which could only have one flat per floor, or walls of flats in these behemoth developments which cover whole swathes of the hillside. Both evoke the same response: Who would want to live there? The former because frankly they look like one typhoon away from tipping over, and the latter because they look the modern day equivalent of an anthill. But this in Hong Kong and rule number one of Hong Kong is and has alway been: normal rules do not apply. 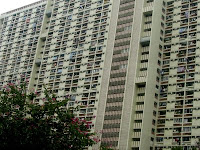 Don't like the mountain? We'll move it. Feel like the harbour is too wide or we might need some more land? Dump the mountain in the water. Crudely put, this is exactly what they have done. We finally arrive at our old apartment block, which miraculously has survived intact. It is an old concrete and stucco 8 story featureless building. It sits between 152 and 156 overlooking the Hong Kong football stadium (where they hold the Rugby Sevens) far below. 152, which used to be Lincoln Court (or was it Peace Mansions?) has been razed and replaced by a 30 story Gulliver called (grandly enough) The Colonnade. The new building is all grey polished stone and steel and glass, in marked contrast to the rendered concrete of our old home. We snap a few photos 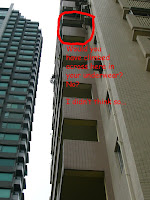 (especially of the rear balcony, the site of a near attempt by me to clamber across the rear to our balcony, having been locked out of the apartment (on purpose) by Steens in my underwear whilst emptying the garbage. This was punishment for extreme sloth at one of our early dinner parties. Great moments in newlywed history. I would have been nuts to attempt it, but hey, what price common sense when you are 25 and pissed off. We have a good chuckle over it now. We then walk down the road (on one of the world's narrowest pavements) where Steen used to have to carry shopping back from Dairy Farm dodging mini and regular sized buses who took absolutely no notice of pedestrians. Dairy Farm no longer exists either, having been supplanted by a very upscale money drainer call The Marketplace, by Jason. No doubt the name was supplied by the same mind which dreamed up The Colonnade. This emporium has everything but at a price. Whoever Jason is (does he actually exist? je m'en doute), he is no doubt doing very well. We decide to take the minibus (or Light Bus, as they are called) down to Causeway Bay. We have three false starts. The first because we have no change and the driver doesn't take bills. This is rectified at an nearby petrol station. The second because we neglect to look at the front when we get into it, and realise only when it starts heading up the mountain that it was going to Jardine's Lookout, where we had to disembark (you yell yau lohk!) and walk back down to where we first 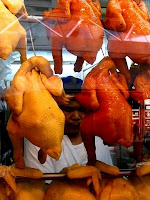 were. Third time lucky took us down to Lam Fong Road, where we could make reservations at our destination for dinner the next evening at The Red Pepper. The whole area used to be a rabbit warren of small shops where I could buy a faux Lacoste tennis shirt for $1.5. Now there is Luis Vuitoon et al. Oh well. The same can be said for our attempt to see my old office across the street from the Excelsior Hotel. The World Trade Centre used to look over the Yacht Club and the Harbour and the junks and fishing boats in the Causeway Bay where if you were particularly adventurous you could have seafood taken directly from the harbour cooked on the boats (that seafood which had dodged the raw sewage and the plastic bags, that is). Now it overlooks a freeway. The harbour is 100 yards away. Having given up on reliving the past we were walking down the alley between the two buildings when a workman shooed us away and pointed up. There dangling from a crane about 20 stories up was a whole bundle of the everpresent bamboo scaffolding which the construction daredevils use to build these buildings, of course only loosely secured. One of those bamboo poles would make a pretty good human satay stick dropped from that height. We got his point and hurried past hugging the opposite wall. In any case everything was either built up, being built up, or in the process of being torn down to build something else up. I kept on wondering why. The original purpose of trying to cram so many people onto Hong Kong island, which let's face it is a rock with pretty steep sides, was because it was British and there was really nowhere else to go. Now the whole thing belongs to China, which though crowded still has an enormous emount of land. I don't get it. Maybe the contraction of the world economy will slow down this process, but I kind of doubt it. The Hong Kong Chinese version of the Yorkshireman's saw where there's muck there's brass has got to be where there's sky there's brass. And the sky seems to be the limit. The credit crunch has had one effect on a key point of Hong Kong life: shipping. The harbour used to be like a freeway of varied sized boats moving back and forth. Now the strait between Pokfulam and Lantau Island to the west is like a big ship parking lot, with empty container ships waiting forlornly like whores on a slow night in Wanchai. Steve Marzo said that the big problem was where to put all the empty containers, which normally would be out on the high seas full of Chinese goods heading to Europe or the States. One suggestion was to use Kai Tak , the old airport. Now THAT would be ironic. We continued our lazy perambulation through Wanchai, our languid pace becoming quite hurried when we realised we had to meet Eve Yang at the Hopewell Centre, a round building which used to stick out but now is lost in the shuffle of skyscrapers vying for space. She was going to show us some furniture shops on Queen's Road East. We arrived with no time to spare, and we sampled a few stores before finding exactly what we were looking for, some minimalist rosewood chairs. Most of the furniture they make in Hong Kong, especially the rosewood and other heavy woods, have, as a upscale Bostonian real estate man once told us, "good bones", if you get them to make them without all the Chinese googaws which look out of place in a Western context. Having made our choice, we adjourned for dim sum, which though delicious, had deletorious 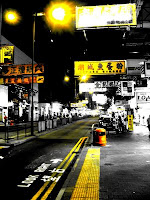 effects on Steens. This first day's activity confirmed two facts about Hong Kong. Firstly, due to sterling's newfound status as a toilet currency, there are precious little bargains to be had. Secondly, the little merchants where one could haggle have since given way to large multi-storey flash malls with homogenous prices (all of them high) and brought to mind three words. Overhead. Overhead. Overhead. So no bargains then. This is confirmed when we go to price up a video and find (shock! horror!) that it is 1.5x the price in the UK. Nevermind. One impulse well and truly buried. 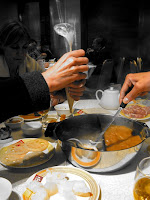 That night we go to a Chinese hotpot restaurant in Wanchai, conveniently near some whorehouses and in the same building as a sauna/massage (ie. whorehouse). The word for hotpot is Da Bin Lo. This is better remembered by the mnemoic DA (that's me, Toby's Da), BIN (as in we have BEEN to the Hotpot restaurant) and LO (as in LOW, which is what both Steens and Adrian felt the next day). Amongst the many variants of raw materials we dropped into the two broths (the same pot, separated in the the middle...see picture) was fish maw (when asked to explain, Adrian says fish guts) and some random shrimp stuff squeezed out of a makeshift tube (also in picture) into the boiling water which, when cooked, resembled (not to put too fine a point on it), a miniature but very long tiny whiteish turd. Enough about that dinner then. I actually enjoyed it, though perhaps the next time I will have no maw of the fish maw, if you catch my drift. Go to Chapter 3
Posted by D Eric Pettigrew at 07:59

Email ThisBlogThis!Share to TwitterShare to FacebookShare to Pinterest
Labels: LETTER FROM VIETNAM