We move east, wandering to Central after a spectacularly mediocre breakfast at the hotel. The old Hong Kong catered to gwei lo tastes, as far as hotels were concerned, or at least that is my recollection. I used to get coffee and croissants at the Excelsior, for instance, which would rival any hotel in Europe (though perhaps not Paris). This hotel, missnamed the Cosmopolitan, is in the old Xin Hua news agency building and is located near the old AIU building which had coffin shaped windows and thus horrible feng shui and no Chinese wanted to work in it. Perhaps some of the bad feng shui rubbed off. The Cosmopolitan caters to the less discerning Asian clientele, and was no doubt designed by a chef who must have a vague recollection of what he ate elsewhere, (a bedsit in Doncaster, I am thinking) and not necessarily for breakfast. The buffet is some Hunter Thompson on acid or perhaps an impoverished student-who-just-can't be-arsed spread. Chef Boyardee (ie. tinned) spaghetti, baked beans, three type of ersatz bread, congee, boiled ham, tinned Delmonte cocktail fruit, fake orange juice, bologna in various shades of faded glory. A healthy and nutritious breakfast? I don't think so. Only the mealy watermelon added as an afterthought seemed fresh, which is a relative word. In my mind I tried to dream up a three line haiku for what was on offer. The best I could come up was: Easy Greasy Queasy. Oh! Comprende? Thus began a day of indifferent culinary experiences. We did go for lunch with an old friend from London who is now in HK at a spectacularly modern cool (and expensive) Japanese fusion restaurant called Zuma in the Landmark Centre. The interior, all beige stone (granite perhaps?) and wood, was ubercool, in Eurospeak. You could live in the bathroom with minimal fuss. I had a starter of crispy spiced tofu with miniscule bits of avocado and a spectacular mix of shiso leaves, baby watercress, and lettuce with a mighty tasty sesame/lime dressing. Everything else was less spectactular (considering the price) but at least banished the memory of the breakfast. 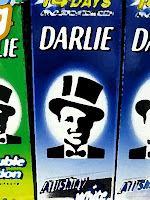 After wandering through Central, where we perused through some stores (look, don't buy...thought I would never say that about Hong Kong) and amused ourselves with some products. For instance, when we used to live there there was a Chinese toothpaste called Darkie. Deservedly, it attracted the unfavourable attention of the world's media. The old tube had a picture of a black minstrel. Got a problem with that? said the Chinese. We will change a letter. The result is to the side. Same church, different pew, but as people who were exploited by the West in the Opium trade and who got jilted out of a long lease, I guess their attitudes about people's sensibilities are different. Or is it just the money? Anyway, while I was snapping a picture of this, I was approached by a guard who said: No pictures. I can assure you, this would NEVER have happened in pre-1997 Hong Kong. We then went up to the Peak on the tram, which used to involve (oddly enough) buying a ticket, getting on the tram, and then getting off at the Peak. The train used to be what it was designed by its Swiss constructors to be, a spectacular engineering effort to transport the wealthy mandarins and their servants up to mid-levels and the Peak. Now it is a way of fleecing tourists to relieve them of what money they have left over from paying exorbitant prices in Central for high quality goods by transporting up to the Mall formerly known as the Peak to pay exorbitant prices for assorted tourist crap. To wit. On the way into the tram you stand in a queue (in case you don't understand what a queue is, there have been barriers erected to help you figure that out). At one point in the winding journey they snap your photo. Before buying your tram ticket, for after all it IS a tram, they try to sell you a ticket to Madame Tussaud's. Standing off to the side to help you make up your mind is a lifelike (of course) statue of Jackie Chan. All of the other pictures of stars were completely unknown to me, should for some reason I have had the inclination to go. Eventually as you emerge from this gauntlet of hucksterism, you are again accosted to buy the photo you have just NOT requested to have taken, or perhaps requested NOT to have taken. Either way. Doesn't matter. They still have their hand halfway in your pocket. The ride itself is very impressive, ascending at an angle which makes one marvel at the sheer ingenuity of the constructors (Swiss, as I said, but I will repeat it just to make you feel safe on your next trip there). On the way you pass various apartment buildings built into the steep slope, again proof of man's ability to overcome any obstacle, or perhaps sheer folly. Like most engineering feats, you can only gawp. The passengers, mostly young Chinese, are not gawping. They are snapping. One of the adjuncts of the digital age is the sea of miniature screens one sees seemly suspended in air as everyone uses phones, cameras, or video to record events for posterity. At the top, everything is shrouded in mist. There is basically nothing to snap, unless you count the dragons, actors in costume, and hawkers, who are most happy to oblige...for a price. The Peak, which in colonial days was the preferred residence of the hongs and high ranking expats or government officials, has now gone Disney on us. The world, I guess, has become a theme park. Our theme was to return to the hotel, which we did forthwith. That evening we went to visit Sophie Labarre in Stanley Bay. He husband Thierry, in shipping, was away on business in China. They are old Asia hands and have lived in Hong Kong, Korea, and Japan (like us) with a prolonged stint in Casablanca, where we visited them. Sophie lives in one of those aforementioned banks of 1000 apartments. High end, but just plain massive. On the site used to be the Repulse Bay Hotel (I believe in any case...it was dark and my memory could have slipped). The old Hotel was one of the bastions of the colonial past, unceremoniously ripped down to build this upscale anthill. Gone. Gone. Gone. 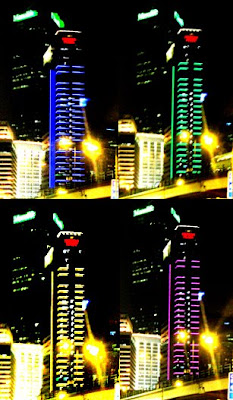 In its place is this teeming concrete monstrosity, a monument to excess. Excess people. Excess money. Even the excess of excess. There is a big round building next door, emblazoned with Hong Kong's latest wheeze, multicoloured exterior lights. In Wanchai, there is even a building which changes colours every few seconds, sort of an industrialised neighbour-from-hell Christmas light show that is at best, noticeable. At worst, it is very annoying. (See above) The Repulse Bay building was built by this very eccentric billionaire lady whose favourite colour was pink (luckily not included in the light show). She died amidst "complications," leaving behind a tangled estate. The big building lies empty, but the light show goes on. Upon exiting the apartment complex, there is a Maybach showroom, with a single car in it. The $8mln car. There were, amazingly enough, no arms and legs 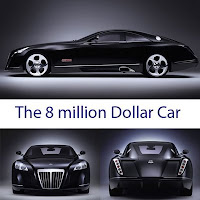 stacked up like cordwood in the foyer, but you get the idea. It screams out MONEY. I wondered who, if any of the thousand people in this "exclusive" luxury development would splash out for this bejewelled lump of metal. Why not just move to someplace nice in the country? Any country. We take Sophie to the Red Pepper on Lam Fong Road, which used to be one of my favourite restaurants. It has survived the mauling (malling) of Hong Kong. Its food, sadly, has not. 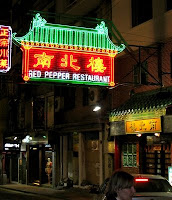 Two clues should have alerted me to going back there after such a spell. The first was the surprised reaction of both Sophie and Eve and Adrian when we said we were going there, along with Sophie's assertion that "ça fait longtemps depuis qu'on est allé là". The second was the pictures of dishes in plastic outside the restaurant. Okay, so it used to be an expat hangout, but at least it was a good expat hangout. Now it is some watered down Szechuan style food undistinguishable from any second rate Chinese wannabe anywhere in the West. Oh well, so much for tacking against Thomas Wolfe's dictum. You really can't go home again, even if it was only a home on borrowed time, like Hong Kong under the British. Go to Chapter 4
Posted by D Eric Pettigrew at 07:49

Email ThisBlogThis!Share to TwitterShare to FacebookShare to Pinterest
Labels: LETTER FROM VIETNAM