THE LEGEND OF TUCUMCARI

Consider this tale of the Southwest.

A dying Indian chief named Wautomah decides to force combat with long knives between two young competing braves, Tucum and Tonopah, to win the hand of his daughter Cari and succeed him as leader. Tucum, loved by Cari, is slain by his rival. Unbenownst to the chief, Cari has watched this battle secretly from the woods.  Full of grief and rage, she seizes the knife, kills Tonopah, and then turns it on herself, taking her own life.

The old Wautomah, his careful plan in tatters and all those who he loves dead as a result of his hubris, stabs himself, crying out as he dies: Tucum-Cari, Tucum-Cari.

This song by my son is about loss and jealousy, and never fails to reach me deep within. 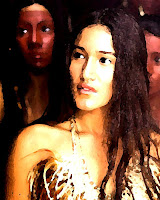 Email ThisBlogThis!Share to TwitterShare to FacebookShare to Pinterest
Labels: The People Of Animal Town