The Anonymity of Glory: The American Cemetery at Colleville-sur-Mer

As I walked through rows and rows of perfectly aligned graves, the birds singing, the leaves rustling in the heaving and salty sea air, and the crash of waves in the distance the only sounds keeping counterpoint to the peace and stillness of this ground, the words above came to me.

The men beneath my feet, or boys who quickly became men, were anonymous. Most had names and states; a few were unknown; but none of them had an age. The only dates written on the crosses were the dates they died; their birth dates a long forgotten statistic. None of them had the chance to become the people they could have become. None of them had a face. Were they muscular or thin? Did they have a shock of red hair or a balding pate? Were they ready with a smile or brooding and introspective? Did they have any idea of what they were getting into? Did death come silently and swiftly, or was it painful and protracted? Were they like my father, from a large family, or the only son of a mother who would always grieve. Were they husbands, or fathers, or brothers, or uncles?

This piece of land is sacred. You can feel it. You can feel it in the respect it commands, in the wonder. Each blade of grass has been lovingly grown and cared for. A great deal of thought has been put into every detail, but the main feeling is one of an inestimable silence of glory, of an anonymous group of men who are all our brothers.

I felt waves of emotion wash over me, my eyes stinging as I thought of my father, who only spoke to me of his part in the war once (his unit came ashore 50 days after D-Day), who died without ever telling me he won a Bronze Star. In the blood and thunder of a few days which passed a long time ago, men like him came to their end, far from home, the long rows of graves silent testament to their glory. Yes glory. The glory of an anonymity which is ageless and timeless, and very human. 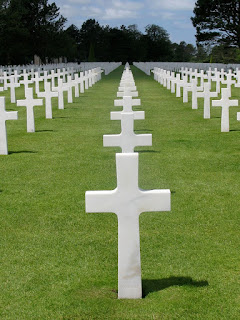 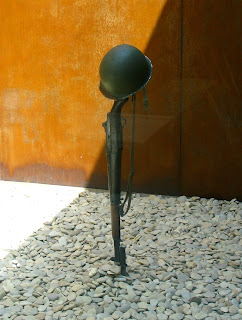 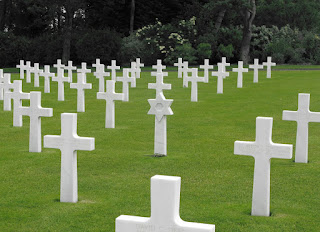 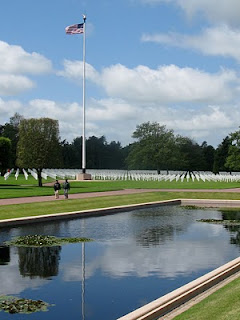 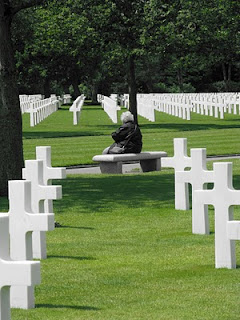 
Don't ever forget. It is a cliche, but it is only because of these men that we can enjoy the freedom we enjoy. The respect we can give them is the smallest of efforts for a sacrifice which for them was eternal.
Posted by D Eric Pettigrew at 20:00