Background
Or how we decided to go...and who we are...


Up until this moment, this trip has been an abstract thing, like watching a headlight off in the distance on a straight road, not really connecting it with the physical reality of a car until it whooshes past. This trip is not my brainchild, nor have I participated in the real physical preparation other than to send a cheque. I have suggested a name for the venture, The Mid Life Canoe Club, but it doesn’t seem to have taken with our group, though of that I cannot really be sure since I have received no comment by email from the members.


And who are we? We are a group of six, four of us going back 30 years to junior high school, and the other two friends of our organiser and author of the idea, Randy Case. Aside from our leader, we are all in the throes of what is commonly referred to as mid-life. Thus the name.


I am Eric Pettigrew, father of 14 year old son Toby who towers over me at 6’3" and husband of Christina, who saw me off yesterday in Charleston, S.C. and flew back to London, England, where we have lived for the past 12 years. I am at a crossroads in my life, the infamous place to which Dante alluded ("Midway through our life’s journey we found ourselves in a dark wood, having lost the path.") The company I headed until four months ago, a subsidiary of a Japanese bank, is no more. The company which I have begun is still in the petri dish, and will not propagate until after I return from this trip. This confluence of events conveniently happened at the onset of summer, and our northern trek presented itself as a once in a lifetime opportunity to mimic the metaphor. I will be in a dark wood, literally. What I find there, and where I will go afterward, is anybody’s guess.


In this group, I have been designated (or rather have suggested myself) as the scribe. 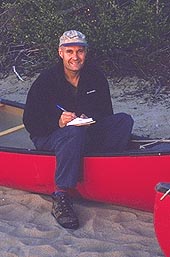 Randy Case is the organiser and inspiration behind the trip. He was a camper at Kooch-I-Ching and dreamt of completing a trip to the North Knife for years and years. Randy is a professor at Boston College, husband to Shelley and father of Andrew and Emily. He is my erstwhile doubles partner as a youth, my college roommate (though he eventually transferred from Duke, where both John Moses and I went) and my lifelong friend. If I had to characterise Randy, I would describe him as someone who fears nothing, who is able to pull off brave (and sometimes foolhardy) feats. He is also a Southerner through and through, with a voice that would carry two miles over water and makes him impossible to ignore. He also has a heart the size of a lion.


To return to the members of our group. Our leader is Dexter Davison, He is 67 years old, and has been canoeing for 52 years in the north woods. As counsellor and camp organiser of Camp Kooch-I-Ching in Minnesota, he has done more than 100 trips on various rivers, including two two-month expeditions to the Arctic Circle in the Northwest Territories. He is providing most of the expertise and equipment for this venture. Dexter is by profession a math teacher, and taught Randy Case, John Moses, and I about quadratic equations, functions, and series in a galaxy far far away in Spartanburg S.C. during the late sixties. Dexter is a man of few words, I will come to find out, but one whose actions never stop talking. In writing these words after the event, I have come to think of him as a hero in the classic sense of the word.


John Moses is a doctor (pediatrician), author, photographer, and renaissance man. During college he took time off and hiked the entire Appalachian Trail at 20 years old. He works at the Duke Medical Center, and has published books on teenage pregnancy and has done many photographic exhibitions. His subjects are studies of real people, and are living proof of Mose’ ability to connect with others. I have heard him described by a patient as a true gentleman. He is modest, discreet, sometimes quiet, and a genuinely good person.


Pete Vanacore is a friend of Randy’s. An animated New Yorker, Pete runs a Christian organisation helping disadvantaged youths ages 8-18 who have been in trouble with the law. He is married to Diane with three children. He has a New Yorker’s garrulous wit, and at around 5’10" is the shortest of any of us, a fact which belies his overall athleticism and determination. Pete is an avid skier, rock climber, and hiker and has a raft of stories and relevant experiences. He also has a good voice and knows the words to practically any song ever written.

Gary
Gary Schofield, another of Randy’s friends, is a big bear of a man who was a former professional hockey player drafted by the Maple Leafs. Gary is retired at the early age of 46, having sold his successful tree cutting business. He now devotes his life to scuba diving, car racing, and other adventurous pastimes. Married with a son, he comes from a large family of twelve, three of whom are professional hockey players. As the oldest son, he has the quiet air of competence about him, and is someone you know immediately will carry a big weight (literally and figuratively) on his massive shoulders.