We meet at 11PM at Winnipeg airport the day the evening of the 16th. Dexter is already there when I arrive after having spent the day piddling around Winnipeg. In addition to the map purchase, I saw an IMAX film called Island of the Sharks, shot off a reef at the Cocos Island in the Pacific. Watching the sharks and various other predators devour each other in the frenzy of daily life, I am reminded by a quote from Jacques Cousteau: "Dans la mer, il n'y a pas du cruauté, seulement l'angoisse de survivre."- In the sea there is no cruelty, only the terror of survival."). This film, and this quote, strike a chord within me as I wait for the others and contemplate what we are about to do.


Dexter and I talk a little about old times and catch up on what we have been doing since I last saw him over 25 years ago. He looks little different than what I remember, save for grey hair which he admits he dyed until recently. He has the same distinctive gait when he walks, a stride more than a step that sways from side to side. He allows that details on the trip from Randy are a bit vague, but that as far as the arrangements he is responsible for (canoes, food, travel including float planes, trains, and a rental van) everything is ready to go.


The others arrive en masse, though we have to wait for Gary. He arrives with a WWI vintage .3006 rifle, which we have prevailed upon him to bring to ward off polar bears, and is hassled by customs. They obviously disapprove of his cavalier and vague attitude. When asked to provide an itinerary, he replies "We have none." Strictly speaking, this is not true. It is just that none of us (other than Dexter) know what it is. The custom officers think he is some weekend lad off to shoot off a rifle for fun. Eventually they relent, and he joins us all.


We do have an itinerary however, and it begins with a long drive which will last all night until mid-afternoon the next day. The first leg is 765km to Thompson. When asked directions (we will share driving in two hour shifts), Dexter responds to go to the first stop sign and hang a right. He is not kidding of course (Dexter does not kid really). The scale of the truth here in Canada is revealed when we find the aforementioned stop sign 500km later in Pon Ton. We stop for gas there (Rule one in these parts, when you see a gas station you fill up, regardless). In the café, the menu for the day is Denver and Soup. When I ask what this means, the cook says ham and eggs and beef barley, but allows that neither of them are ready as it is 6:00 AM. After seven hours in a well-seasoned van (156,000 on the clock and lacking only the ceiling mirror to make it a veritable pleasure palace on wheels), we still have over 500km to go, including our flight.

The Route: From Lynn Lake to the Hudson Bay


We continue on up through Thompson, where we pick up Jack Crowley, a friend of Dexter's who will drive the van back to Thompson from Lynn Lake, our next destination. He tells us in great detail about river trips (the Seal and the Caribou are his two favorites) and throws in a few bear stories for good measure.


Finally at 3:00PM after lunch, a flat tire, and numerous bumps on the highway due to frost heaves, we arrive in Lynn Lake. The town, suffering the throes of withdrawal of the gold mine which was its raison d'etre, has a dilapidated look. We add to the local economy by buying fish lures at the general store, and I almost buy a mousetrap which has been turned into a cutesy souvenir (Complaints Department, it says. Press this button to make a complaint.)


The local indian youth have taken to wearing LA gang colours. I see only one house with the lawn mowed. It is a depressing sendoff to the wilderness.


We catch our floatplane here from LaRonge Air, a DeHavilland Twin Otter circa 1967 which easily carries three canoes and all our gear inside the plane. After an hour and a half, and low level circling of North Knife Lake to find a suitable beach, we are deposited next to one halfway up the lake, and our journey begins as the Otter takes off in the distance. We immediately pitch camp, getting in practice on the as yet unfamiliar tents. 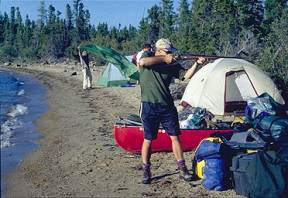 First Camp: Prepare for Anything


Weather: Unbelievable. 75 degrees and not a cloud. A swim in the lake is refreshing, not nearly as cold as I had been expecting.


Topography: Forget the dark woods. Instead imagine aspen and spruce sparsely placed, countless lakes, a flattish terrain stretching on forever, marred only by the scars of forest fires which are allowed to burn unchecked, proof that it is not only man which is destructive, as they have all been started by lightning.


The road we have come on to Lynn Lake, now almost 150 miles away, must have cost tens if not hundreds of millions, yet serves only 15,000 people in this vast wilderness.