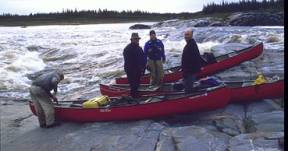 Before: A Giant Sucking Sound


The beginning to the day would have been laughable had it not been cold and rainy. We had left the canoes on a ramp-like rock at the bottom of the falls. My partner was Pete, and our canoe was placed the furthest right from the others on the rock, literally two feet where the falls ended in a monster hydraulic. The others took off. Knowing that we would quickly fall way behind, without thinking I jumped in the bow like an idiot (let me repeat this, like an idiot) and Pete also jumped in. As we slid down the rock the hydraulic slowly but surely began sucking our canoe sideways. In a few seconds (that felt as though we were in slow motion), it swamped us, flipping us out and driving us both to the bottom in spite of our life vests. It spit the canoe out over (or in my case on) our heads. We surfaced sputtering, in shock, ashamed at our stupidity, and very cold. We swam to the side while the others looked on from down the river, mouths agape at our sheer ineptitude.


When it is 45 degrees, no amount of good natured ribbing can alleviate the gravity of such a mindless mistake. ("Jeez,Eric, what catalogue now?" they said as I removed some goretex gear I had held in reserve, my provisioning a constant source of amusement especially when compared to Dexter, who wore the same cotton shirt, tee shirt, trousers and boots (no socks) for the entire trip.) 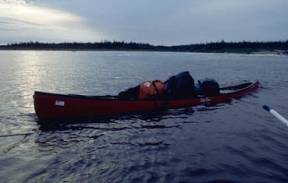 After: The Sinking of the Bismarck


Pete and I restarted paddling in serious energy deficit as our bodies were fighting the cold and the wet, and more to the point, our morale at rock bottom (no pun intended).


The rest of the morning was a hard miserable slog, forcing ourselves to try and keep up with the others while fighting fatigue, cold and an unpleasant drizzle which quickly permeated the new layer.


By eleven I blew my whistle for a break, and after catching up with the others found they too were suffering in the rain which had begun to fall steadily. Then almost miraculously we happened upon a cabin whose owner, though having nailed everything shut, graciously left a hammer lying around to ease entry. The cabin was not on my map (near Nowell Lake). We started a fire, ate, and dried out before heading out again.
Oh yes. On the way we saw our first polar bear. From behind Pete and I saw Mose's paddle indicating right river, which usually meant that we should head right to avoid some obstacle. I looked right, and not 100 yards away from us was a decent size bear, his white coat muddied by the water. He looked at us briefly before quickly turning and bounding through the bushes. The strange thing about the timing of this momentous event was that even though it was something we had anticipated, discussed, prepared for, and perhaps even dreaded, when it happened for Pete and I in any case it was an irrelevant sideshow to the wet and the cold which was driving us on. "Hey! A polar bear. Yeah, great, let's get the hell out of here. Stroke Stroke etc."


After the cabin we continued on in the rain. The warming up effect of the fire and the drying out was only temporary, and quite soon we began to get cold and wet again in the steady drizzle as we pushed on.


Any stop meant that the heat generated by the effort of paddling would quickly dissipate, yet paddling meant burning up more of your internal reserves.


The sweat, if allowed to cool in the wind, would quickly overshoot its intended purpose to regulate body temperature and instead would turn into a super coolant, the last thing you need in that weather. Ditto for sipping cold water. A critical mistake, wearing a cotton tee shirt under my polartec, meant that I had cold and wet against my skin. 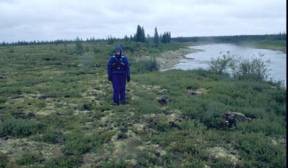 
At one point Dexter stopped us and we walked up the steep bank to look at the changing landscape which had turned into tundra. On this flat treeless plain the wind whips across and exaggerates any temperature change. On this day we were reluctant tourists, and stopped only briefly before returning, teeth chattering to our canoes.


A few moments later we had reached the bend in the river where the North Knife heads towards the Hudson Bay, and Dexter quickly chose a place to stop, one of the last campable places on this stretch of river.


It took a while to build a fire in the drizzle which had abated somewhat. Dexter cooked some beef stroganoff (not enough water really so the freeze dried beef was still crunchy but given the conditions no one cared). We tried as best we could to rebuild our internal fires, jamming down as much food as possible (including chocolate pudding) and standing around the fire to return our clothes to an acceptable level of dampness from their sorry state.


We then repaired to our tents and the only warm place, the sleeping bag.


My carefully constructed strategy of dry clothes in the dry bag, returning my gear each day to a suitable condition to start the next day was in shambles due to the mindless dunking we subjected ourselves to at the beginning of what was a tough day. It today were a fish, I'd throw it back.


Lessons learned:
1.       Pay attention to the task at hand. Don't think about paddling when you haven't even  started correctly, and consider the consequences of each action, no matter how insignificant it may seem.
2.       Cotton is verboten. Get rid of it. It is a liability and could indeed make a dicey situation out of a merely uncomfortable one. Polyester is king.


In normal life mistakes are usually forgiven. You miss the train, so what? Another one will be along. In the wilderness, nature quickly exacts a price for stupidity, and deals with you most severely.