Define contentment. Is it that pleasantly tired feeling at the end of the day, the first 25 miles (or perhaps more) safely under your belt? Is it sitting on an impossibly soft bed of lichen under a spruce by the side of a benign river and even more benign skies?

Is it the sound of nothing but the pen writing and the wind wandering aimlessly through the trees? 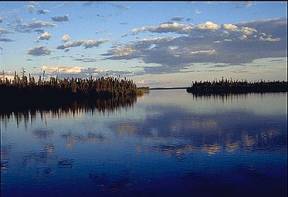 
The only thing missing is not being here with my wife and son, who I am sure would love the end result, if not exactly the paddling part.

That part was hard work, especially up the lake to the mouth of the river (15 miles). Once on the river we moved quickly. The river was very high (contrary to what Jack had told us in Thompson), which paradoxically made the first set of rapids quite easy. Tomorrow might be different.

Randy caught four fish, all Northern Pike, and we cooked two for lunch and released the others.


Campsite:  A moss and lichen covered hillock with spruce.


Partner: Pete. We talk of our lives, our reason for being there, of Christianity and Taoism, of our families. This is on the lake, as we are way behind the others (a pattern that for me in any case was to repeat itself). At this stage we have the time and energy to chat.