All have consequences for now and later and debated, sometimes hotly. Randy has balls the size of Detroit, and went down two decent size rapids with Pete and only swamped once. The second was the worst technical effort, floating straight down the pipe sideways into massive haystacks, yet somehow they managed to get through. 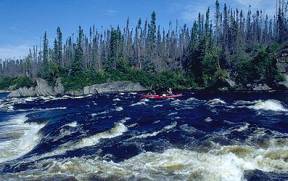 Randy and Pete brave the rapids


The canoes we are using (Old Town fiberglass!!) are built for distance, not speed, and tend to plough through the waves, taking on water with each successive wave. Swamping is surprisingly easy.


The least water is the preferred approach. The first few capsizings were a result of ignoring this at our peril. Basically this involves picking a line with the least flow and the lowest haystacks, and casing out the whole river. Early on we convince Randy that were he to capsize and we were to lose a canoe (plausible given how high the river is running) the rest of the trip would be compromised, and riding three to a canoe would necessitate portaging just about every ripple. So we pick the least water and go. As the trip wears on (or the day) we get more adventurous, at least while the weather is good.

Fishing under some falls
The walking-the-dog method or letting the canoe down the rapids by holding onto the bow and stern lines, works when the drop is not too great  (four feet is about max) and when there is room to walk along the side.


Portaging is the last resort. The canoes are heavy, though Dexter, Gary, Randy and even John manage them on their own. Pete and I do not. We also portage once with full canoes, with all six of us lifting at once.

Portaging through the Woods


Today we get to use all methods save a full portage. We portage empty over the two big falls. On the first one, a spectacular twenty five foot drop, we decided to run the rapids on the downstream leg.  This involved avoiding a large submerged rock on the left and a huge rock outcropping in the middle right where Dexter had sacrificed a canoe on a previous trip (bowman thought left, sternman right, the canoe hit the outcropping sideways at full tilt, crushing the canoe). Telling us this story tended to concentrate our minds. John and I managed to get our line okay, missing both obstacles, but we wandered too far in mid-channel once past them, caught a couple of haystacks, and slowly but surely swamped. We were able to guide the canoe to shore without capsizing, no mean feat when they are fully loaded and very unstable. In this weather, swamping is acceptable, but as the temperature drops (which it does each day) it will be no fun whatsoever. 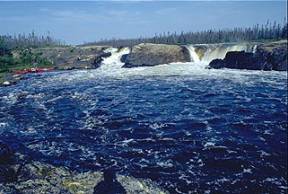 
We decided to camp under some falls which were marked as rapids on the map. Everyone was beat. Portaging takes a lot out of you.


The campsite was on a cliff overlooking the rapids which John and I shot successfully where Dexter handwalked.


I was 100% whipped, retired at 9:00PM, said two words to Pete, and slept the sleep of the dead. Randy and John stayed up late talking and watching the northern lights.


Dinner: Dexter cooked some amazing spaghetti which never tasted better. We all wolfed it down without speaking, always a good sign for the cook.


Next Chapter
Posted by D Eric Pettigrew at 09:11