Whoa baby. Forget the contentment rap of the previous day. This was the business. Reality set in very early as Dexter and I capsized in the first rapids after less than a minute of paddling, hung up on a rock. Good safety tip: do not lean upstream. Lean downstream and you may pivot off the rock. Lean upstream and your boat fills with water. Bye Bye.


There was quickly more to come. After we had righted ourselves and bailed the boat, on the second rapids, all three of our canoes went over a big ledge, busted a hydraulic and promptly capsized. A hydraulic is the washing machine-in-reverse effect of water rushing over a flat rock, causing a backwash of immense power. This time, Dexter was carried on ahead by the current, chasing after John's sleeping bag in a clear drybag which had not been properly secured, and eventually disappearing around an island.  I stayed with the canoe, clutching my paddle, and watching as my hat which had been knocked off in the hydraulic came floating past me like a dog returning to its master. And a good thing too, as we lost two out of three bailers (not a good move). I righted the canoe on the side, a bit chilly and with good sense belatedly knocked into me. 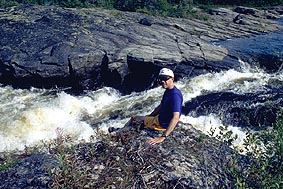 John in front of a Hydraulic


The others were well downstream, and so after hefting the bags back into the canoe (John's bag by Patagonia, if indeed advertised as a drybag, was anything but, and weighed a ton), I ran down a brief rapids on my own. Eight in the morning, and the adrenaline already pumping full throttle. Live and learn.


We would never again go down rapids without casing them first.


Later in the day we handwalked down one, and at the end of the day came to a real doozy, three shelves which went around a blind corner and then went down either a Class Five cliff or a Class Four series of shelves. In spite of Randy's insistence that he could do them, we chose door number Three: portaging. We set up camp next to the rapids, and then after dinner we dragged the canoes up through the woods over fallen trees. This was my first glimpse of the steady and indefatiguable Dexter. No fuss. No discussion. No time to second guess. This is what we have to do. Do it. And do it today, not tomorrow. Give yourself a flying start at the beginning of each day.


Dexter also portages everything on his own: canoes, food boxes, whatever. 100 pounds or more, and awkward shapes. Very impressive for 67 or indeed any age. 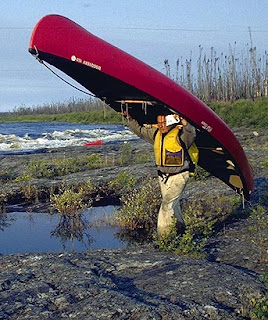 
Distance: Only 18 miles due to capsizing and portaging.