THE MUSIC IN MY HEART Chapter 10 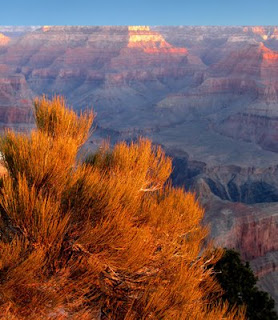 Having missed sunset the previous night, we resolve to see the sun come up over the canyon, and with a somewhat tenous estimation of sunrise (and no internet or phone signal) we collapse into bed. I set the alarm for 6AM. Our plan is to rise (we are staying in Tusayan, having entered and exited the park to get to our hotel), go to the park, and then return to the hotel for breakfast before continuing on. We arise at the appointed hour, and with only a modicum of grumbling from the non-early riser between us, drive back to the park in the pitch black and bitter cold. The thermometer reads 5 degrees Fahrenheit (-30 degrees Celsius). Oof. This time we have to pass through a manned gate, or rather a womanned gate, as the ranger is a female with the classic Smokey the Bear hat. We pay $25, and ask to the best place to see the sunrise. She says Hopi Point (pronounces it Opie Point) and indicates on the map where it is, 11 miles off. We head off into the dark. Before leaving we ask her at what time sunrise actually is. She says 7:38. Okay, we are off as usual. But it is okay. Better early than late. We arrive at Hopi Point, and we are the only people there. The light appears way before the sun, and by 7 o'clock the eastern sky has changed colour, and we can start to make out the variegated hues of one of the world's truly amazing places. Even I can't exaggerate (as I am prone to do) the size of this gash. I said 5 miles across. In some places is it actually 10. The shortest walk down and up on a trail is 24 miles. To go by road to the north rim is 200 miles. Far below, we see the Colorado in the dim light. It is clearly frozen in spots (no surprise at 5 degrees). We are woefully underdressed (sound familiar?). I have no gloves, and a toboggan I bought at a gas station in Jicarilla for $1.98 does a disservice to the word useless. I shiver and get back into the cab from time to time. We keep the engine running. By 7:30, German couple, some Chinese, and two fat Georgia bells (their shape, not their type) show up. "It don't get no colder than this." says one. Everyone ignores each other, caught up perhaps in the cold or perhaps the anticipation. The sun eventually comes up and we snap photos. It is exciting. Primeval. Magnificent. And cold. 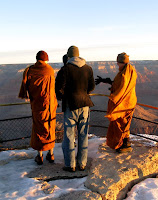 We get back into the truck to go to the next point and hike a bit out to a promontory where we join some Hare Krishna monks and take some more pictures. I think to myself: I hope these boys have long underwear under their robes or they are really in trouble. We then return to the hotel for showers and breakfast. I also spend some time shaving Tobes, sculpting a magnificent Van Dyke more keeping in LA than his bearded woodsman look. We have been truly enriched by this experience. Cold but rejuvenated, and raring to go. We call Joel, who says it is not convenient to come a day earlier than expected as he has a houseguest. I had already changed dates on him once, true to my nickname in grad school...Wadhead...(I allow this gratuitous insult making allowances for the fact he went to Carolina). We calculate the distance ,accurately this time, and realise we can easily make LA. We hesitate between staying somewhere outside LA and then coming in the next morning as planned. Instead I call Charlotte, with whom Toby had stayed two summers back while he worked for Miles, Charlotte's husband, a successful screen writer (Smallville, Spiderman, Lethal Weapon, Jackie Chan etc.). Charlotte, who is a dear soul full of joy and laughter (I was her first boss and I hired her on her birthday) and who will always be on my list of favourite people, says of course I could stay the night with them. That's it, then, Tobes and I decide. Today is the day. Right here. Right now. We are now hurtling towards a surprisingly green and mountainous Arizona, heading for California and our target, one day early. It is still chilly outside (40 degrees) as we cross over some mountains. Suddenly we are crossing the Colorado River, and after going through a checkpoint where some border police (yes border police) rifle through the back of our trusty steed to see if we had any contraband, we are in California. Last time I looked, both Arizona and California are both in the US, a fact lost on Arnold, I guess. We are now apparently in a different country. No I mean it. The first thing is that temperature is suddenly 20 degrees hotter. No I am NOT exaggerating. We stop for lunch. People are in T-shirts. For us, recent graduates of the school of freezing our butt off only 4 hours earlier, the contrast is surreal. The desert outside is deserted, as the name implies, but the whole place has a different feel to it. More developed. More diverse. The woman behind the counter ( a Taco Bell) seems genuinely interested in explaining the different products. The food is surprising fresh for a chain. Tobes takes over driving a short while later at our next Frisbee stop, 1 1/2 hours outside of LA, where suddenly civilisation comes onrushing at us in droves. As does the end of our trip. 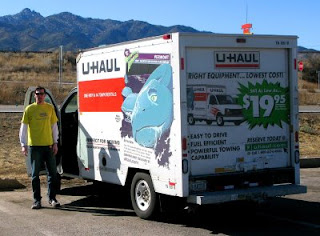