THE MUSIC IN MY HEART Chapter 5

We rise early and get a workout at the local gym, where Toby observes an interesting interplay between a strutting and primped up young Marine back from Iraq and some of the other chest puffing Alpha males in the weight room. The empty boasts of the young vet fall on dubious and deaf ears as they obviously don't believe his war stories. The gym is a maze of convoluted passageways (all breezeblock and glass, where you have to go upstairs, down to the end, then downstairs and double back on yourself to get to the weight room which is tantalizingly visible at the entrance). A bit like the policy in Iraq, I venture. 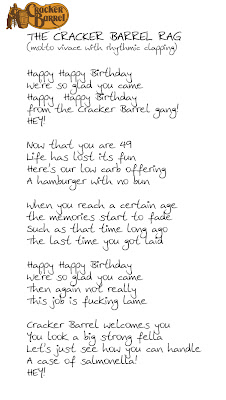 Suitably buffed, we head out, and stop for lunch at a Cracker Barrel, perhaps the best place to observe a slice of Americana. The waiters and waitresses emerge every once in a while to sing Happy Birthday in the official Cracker Barrel way, with bored looks on their faces. This demands a rewrite, and when Toby cuts into his chicken breast (deep fried, as is most of the meal) and finds it rare (okay for beef but definitely not for chicken) we duly comply. We imagine what the bored entourage really mean to say to the somewhat matronly and dumpy woman they are serenading, or what they would sing to us. The result is to the right. 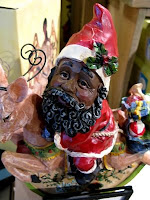 After this bit of light-hearted fun, we adjourn to the restaurant store, where there is a deal on their black Christmas items. A black Santa. A black Angel. A black family. Everything reduced 70%. Toby walks out with a black Santa on a reindeer, and I take pictures. Sambo art reappears constantly as a surprising theme all along our trip. Why, I wonder?

NOTE ON PORTIONS- We order fried chicken breasts. A single order is two full chicken breasts off of supersized chickens. Enough for for a family of four frenchmen, let's say.
Finally, after wending our way across Pennsylvania on I-81 and I-80, we switch off on a state highway 28, a single lane country road. It is snowing and sleeting, and Toby is driving. It gets dark, and there is a considerable amount of angst from both of us, especially since we do not know where the hell we are going. We call Kevin Walsh, with whom we will be staying near Pittsburgh, and he is fairly curt, vague, and dismissive with his instructions. Only because he is watching his team, the Giants, play the Cowboys in the NFC championship, and there are 20 seconds left in the half with the Giants about to score, a fact we discover later. No explanation needed. We are guys, after all. 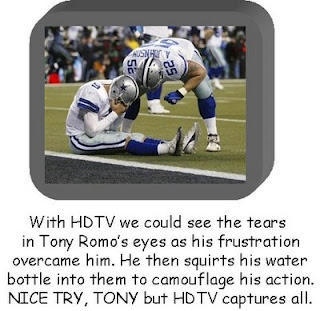 We eventually arrive at Kevin's and Maureen's in Fox Chapel, where we have a jolly time watching the game on his new HDTV, the likes of which I had never seen. We then partook of a delicious meal of burgers, nachos, and guacamole, and meet two of their kids Kate and Brendan, (Emmett, their oldest, being in the UK where he is a student at St. Andrews). Toby and Maureen talk at length and get on like a house afire. The next morning, armed with Maureen's bag of goodies of sandwiches, cakes, fruit etc. we resume firing, and head out for West Virginia and points west.
Go to Chapter 6
Posted by D Eric Pettigrew at 12:08