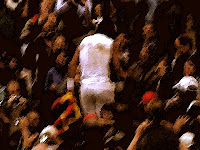 Throw away the clichés. They were all there in the pot, bubbling up to the surface as the match slowly came to the boil.
The irresistable force meets the unyielding object. The hearts of two lions. Overcoming the odds. Backs to the wall. Pretender to the throne. The reigning monarch. Grace under pressure. Mano a mano. Blow for blow. Substance not form. Triumph of the will.
Throw away all the superlatives as well. Wow. Unbelievable. Stunning. Excellent. Perfect. Amazing. Phenomenal. Wondrous. Inspiring. Shocking. Poetic. Elemental. Courageous. Agonizing. Ecstatic. Triumphant. Disastrous. Titanic. Legendary. Epic. Heroic.
Throw away the past and the footsteps of those who came before and the echoes of the cheers for former champions and classic struggles.
Throw away the razzmatazz, the media hype, the baubles, the gold cup and the filthy lucre, the outfits and the logos and the food stalls and the champagne bar and the debenture holders.
Throw away the elements: the natural--rain, the swirling wind, the pigeon who chose the ancient stadium and the most excruciating moments to frolic, the advancing gloom...and the manmade: the flashbulbs, the mobile phones, the c'mons, the gasps, the chants, the guttural cheers.
Throw away the preconceptions and prognostications, the bookies' odds, the statistics, the analysis, the technique, the coaches and trainers and commentators and hangers-on.
Throw away the pomp and the circumstance, the royal box, the scoreboard, the electronic challenges, the ivy, the manicured lawns surrounded by concrete and glass, the walkways and signs and queues and carparks, the practice courts and crowds and umbrellas and ponchos.
Throw away the hopes of a resurgent sporting nation, the red and yellow patriotic flags and painted faces of exuberance and passion versus the understated neutrality of restraint and discretion.
Throw away the close-knit coterie of supporters, the family ties of uncles and aunts and mothers and fathers in awe of their creation. 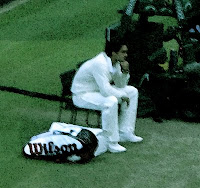 Throw away the strokes of genius. The magic of invention. The angles and contortions, the power and the glory and the wonder of it all.
Throw it all away, and what are you left with?
For one brief moment in the stretch of time which stretches to an infinity beyond our comprehension, those who were fortunate enough to witness it saw a brief glimpse of sporting perfection, the battle for survival stripped down to its most raw and bare and beautiful. This is what it must be like to see inside the mind of God.
I know, and for the rest of my time on this planet I have the good fortune to be among those very lucky few who have the honour and the privilege to be able to utter these three precious words:
I was there.
Wimbledon Men's Final July 2008
Posted by D Eric Pettigrew at 20:48