THE MUSIC IN MY HEART Chapter 3

Preparation fraught. Last minute stuff, waiting for all the various organisational balls to fall into place like a pachinko machine. Electronic gizmos, rechargers, plug converters, USB memory stick, glasses, camera, mobile phone, iPod....a veritable waterfall of those accoutrements which have suddenly become de rigeur for mister modern urban man.
Modern life , or at least the material aspects of modern life, are pretty much like a pachinko game (if you can call it a game), a never ending cascade of ultimately worthless baubles that bounce off each other other randomly and eventually win you at best, a kewpie doll. And yet we are all wedded to them, as if they are actually necessary. Bah humbug! Chaching. Chaching. They eventually fall into place. Clothes. Oh yeah clothes. Almost an afterthought. Have to pack for the cold of Boston and the heat of LA.
New Heathrow security procedures. From kerbside checkin to Chez Gerrard in six minutes. I am in shock at this unexpected efficiency, but that leaves me time to write.
Now then....a quiet moment to reflect on my son. I think of Pops and the poem I wrote about when he was dying.
THE MOST BEAUTIFUL IDEA.
The most beautiful idea on the face of the earth is the idea the child has that his father knows everything.      Jack Kerouac, The Town and the City
Memories beat inside a hollow chest
As I awaken to a sledgehammer of sorrow
I hear you say:
The best of thoughts are tears
When words will soothe tomorrow
I feel the circle close
As your lifewill's slowly broken
You're gone
And now it's me who knows
The truth of what you've spoken
Father, further will I try to band
That ring each has of winning
But know
In life an end must be at hand
To realise a beginning.
To my Dad. With love.
November 1994
My son. The torch is passed. Off he goes on an exciting journey. A heroic journey, I am convinced of that.
He is a gifted young man driven by an iron will to succeed. He is sensitive and perceptive, and a combination of order, discipline, and amiable creative chaos. He has a magical ability to reach out and pluck feelings from your chest through his music, and when he finds the right moment, the right pain, the right vehicle, he will touch the hearts of a lot of people. It will not be easy, but it will happen. This is the message I want to give him on our trip.
What a special opportunity! Something I never had a chance to do with my father, even though we were close.
So much of my father's life was hidden from me...the fact that he was married before (at 17, disowned by his father for doing it and jeopardising his college education, his bride killed six months later in a car accident); the fact he won the Bronze Star (1945 for services rendered in France,Belgium, Luxembourg, Germany, and Austria in the quartermaster corps....for what? I'll perhaps never know); the fact he was military governor of a part of Bavaria; and a whole lot more.....How much do we really know our parents, or anyone else for that matter? 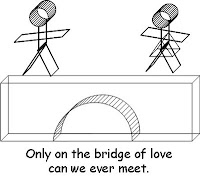 We just had our 27th wedding anniversary yesterday, Steens and I.
27 years is about 14 million minutes, and that is only half of Steen's life. A lot goes on in 14 million minutes.
A lot of thoughts, dreams, feelings.....joyful and sorrowful. Way too much for another person to know or even want to know.
The only bridge to knowing someone else is love, and on that thoroughfare only a part of a person can pass, otherwise the bridge would almost certainly collapse.
So we meet in the middle, the parts of us we choose to send across clasping hands with the chosen parts of our loved ones. That is all. No more and no less, but it is enough to keep the memory of what we know and feel alive. Building the bridge takes two things however, TIME and CHOICE.
Crossing the bridge of love is not one choice, but the cumulative effect of hundreds of thousands of little choices, some conscious, some unconscious, built up over time.
It is this weight of time which is important in loving someone, and in knowing someone you love. If you are blessed, and I have been very blessed to have Steens, then each individual choice you make, each thoughtful action, each shared experience or attitude, can reinforce your love over time, and can strengthen the bridge which is love.
With your child, however, it is by its very nature a different story. Time is much shorter, telescoped into only a few years, most of them formative.
With a child the bridge of love is mostly one-way traffic, and most of that is coming from the mother. A child is too unaware, too selfish, too tentative, to make the obvious steps across the bridge of love.
Most of the time the steps are unconscious ones, ones which are tied up with the child's own voyage of self discovery and development, the desire to achieve for one's own self while in some way pleasing the parent and in a strange manner repaying them for the time and love they have invested in raising the child.
Scoring a goal, getting a good grade, creating something...all these are ways of the child unconsciously demonstrating his love while pursuing his own path. The rest of the sharing process..the communication which is fundamental to building a marriage over time, is by definition difficult, especially with a father who is not around during the day. That is why talking at the dinner table is the most important factor in building a bridge of love between a parent and his child, and I don't mean lecturing, I mean talking. Not talking at, talking with. It is only by talking together that a family is created and sustained, and not just the good stuff either.
I have always told Steens that the family that shits together stays together.
We as human beings are processors, of food, of knowledge, of senses, of ideas, and of feelings. We take what is good and discard the rest, and this is true not only for individuals but for families as well. That is why it is important to laugh, cry, argue, grieve, discuss, dream, share success and failure, and give and take in equal measure.
Otherwise we as processors get gummed up with the bad stuff, either as individuals, families, nations or peoples. We need to let go.
So do I really know what is going on in my son's life, and does he know what has gone on in mine? The truth is probably not, or that a lot of what I think I know I got from filling in the blanks, not from what he has told me. But no matter, this is a real chance to spend some time together at a critical time, critical only because it is a time of change, a time when by nature we are more receptive. So bring on the unknown and may God bless this trip and bring us safely home, and start my son on the long road he has chosen for himself. Go to Chapter 4
Posted by D Eric Pettigrew at 18:33